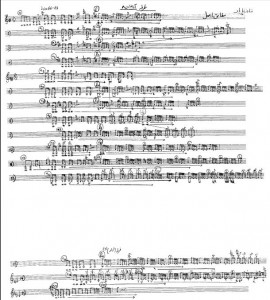 Torqeh or jal is the same bird (Bimaculated lark) and is the name of a muqam which is well-known in Torbate Jam and those areas. Jal muqam is called Torqeh in Esfarayen and Bojnourd. This muqam which was used to be played by Bakhshis/Bagşies (dutar-players) in the past is seldom performed today. Torqeh muqam describes how torqeh flies in the sky. Torqeh soars so high in the sky that cannot be seen; however, it then flies back to earth but flies again to the sky. This variety of Torqeh flight is described in the music.

Torqeh music is comprised of several repetitions of a cliché melodic figure. This figure is moved in different tonal music ambiences. Simultaneously with this movement, the drone also changes.

This polyphonic instrumental form is also very popular in Turkmen music. Here only one example of it, Kach Falak is introduced. 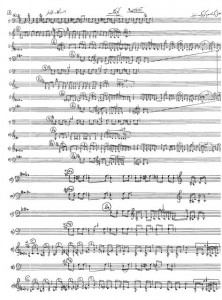 The melody in Kach Falak muqam, as explained in its title, narrates the sorrow of the doomed destiny and is, therefore, performed in “Ghorogh Lar” muqam.

In Turkmen music, muqams which have a sorrowful content or condition are performed in this dastgah[ii]. Kach Falak muqam (Transcription No.9) is performed by Temedera– dutar is called Temedera in Turkmen music.

The beginning figure (Transcription No. 9, a staff 1) appears in the piece as the linking part (inter-mode) in the form of melodic figures. Types of periods of staff 2 (b) either have determined metre or free metre; or have a determined metre at the beginning and a free metre at the end. Almost these entire types end with a concise cliché figure (staffs 3, 4, 7 8, 11-15). In Kach Falak (Transcription No. 9) like in Farangi Rezagholi (Transcription No.7), the second accompanying voice constantly follows the melody’s movement and forms the parallel sequence of two voices.

Additionally, we encounter another form of polyphony in Turkmen music, i.e. sequence or change of dual-combination of voices. Sequence or change of dual-combination of voices is usually performed at the beginning of the piece and is generally based on the change of drone. This change is not definitely based on any chord or harmonic sequence. Another popular polyphonic form in Turkmen music is ostinato. Usually, the figure which emerges as ostinato is introduced as an individual at the beginning[iii].

Polyphonic forms in Iranian music which were studied here were based on a selection of most prominent pieces of Iranian music. These forms are also observed in many Iranian avaz and instrumental pieces. Obviously, the study of more audio sources can lead to conclusions on the existence of other polyphonic forms with regard to polyphonic music in Iran.