On occasion of the 8th anniversary of launching HarmonyTalk Online Journal on 6 April 2012, Reza Ziaei, master luthier and researcher on classical music instruments (violin family), announced that the first phase of the project to improve Qeychak has borne fruit. The new instrument would feature a bowl of ribs and the material used for the surface would be wooden. Carrying out the second phase of the project took more than 7 years engaging the new members of Reza Ziaei’s Workshop. In this phase, new researches were conducted from different aspects on the Qeychak and the modern versions of the instrument which were introduced previously by other instrument makers. The available versions of the instrument were studied in terms of their weak and strong technical features.
The second design of the new Qeychak with four soprano strings and a single-piece bowl was designed and made in 2019; the third and fourth versions of the instrument, namely, four-string alto Qeychak and five-string soprano-alto Qeychak, both featuring single-piece bowls were made in 2020.
After preparing the first versions of the instruments, Qeychak players were surveyed on the new instrument and the project entered the final stage for inauguration.
The above-mentioned phases shed light on the generalities of the project to modify and improve folk Qeychak and modern Qeychak; however, there are still a lot to be said about the design and crafting of the instrument which necessitates detailed interviews with the Workshop members involved in the project. Therefore, an interview was conducted with project members the summaries of which follow: 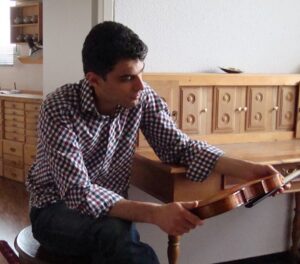 HT: What is the research background for this instrument? Why and when did you think of working on it?
RZ: With regard to the historical background of Qeychak, I should say that the sources we referred to for our research mainly consisted of open sources and literature available to the public. But the major part of our research on the instrument focused on studying the why-ness and how-ness in designing the instrument’s elements, the overall mechanism of the instrument, strong points and structural weaknesses as well as the opinions of Qeychak players.

In assessing each of these reasons and how-nesses, we have tried to make proposals to improve the overall conditions of the instrument based on scientific principles and our experience. Therefore, surveying the changes brought about in the new instrument requires a critical investigation on the same reasons and how-nesses together with a clarification on physical, mechanic and acoustic reasons which were drawn upon in designing the new Qeychak; which are however beyond the limit and scope of this interview.

Regarding the second part of your question, it can be mentioned that we started working on this instrument because we were repeatedly requested by friend artists to improve some of the historical Iranian instruments based on our expertise and knowledge. So, after conducting preliminary researches on the issue while continuing with the Workshop’s main specialized activities, we crafted the first sample of the instrument in 2012; in 2018, we put doing new researches and making new samples, with the collaboration of a group consisting of Workshop’s current and former members, on our agenda.

The Role of Arts in Development of Societies

Mr. Mohsen Ghanebasiri, author and critic in the field of economy, culture and arts, as the next speaker, highlighted the role of arts, specially the music, in development of societies: “As far as the individual upbringing is concerned, a newborn baby is absolutely dependent. The relation between the baby and the parents is based on orders. There is lots of relativity in these orders; therefore, they are political orders. In the economy, however, the relations are mutual and based on common logic; hence, the formation of the concepts of democracy and individuality.