Violin inner mould, an essential factor in developing the idea of violin
RZW

A part of the secrets of the masterpieces from the golden era lies in the special design of the instruments, as a result of a profound insight to and awareness of the significance of the precise calculation of the various components of the object of arts being created, such as making a violin or a bow.
Golden age luthiers, such as Amati, Stradivari & Guarneri, each had their own gold standard method to develop the geometric pattern of their instruments. 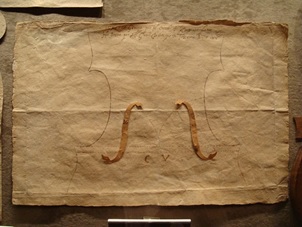 Today, especially in the case of the remaining golden age instruments, we are faced with the fact that extracting the correct pattern from the standpoint of science, geometry and aesthetics is more difficult than ever due to aging, certain inaccuracies in craftsmanship of instruments, and the distortions which deliberately or inadvertently affected the available resources.

Then again this ‘piece de resistance’ can also be made since the creator artist applies his/her scientific and empirical potencies to analyze these brilliant instances of artistry, together with practice and diligence to gain the real and authentic knowledge, far from hidden prejudices and dogmatism.
An important question is that: Which factors had purified the intuition of Golden age masters, and allowed them to create such eternal pieces of art? What kept them safe from aberration, and what gave them the power to follow up on their efforts tirelessly?
Due to the specific circumstances of our era, now any attempt to answer such questions by referring to available resources will lead to serious contradictions. The fact which regrettably represents the incapacitation and imperfection of our modern approaches…
Considering the main characteristic principles of the phenomenon called violin, we realize that aesthetics along with knowledge and experience have provided the foundations for creating a magnificent work of art. As the cornerstone of this action, referring to reliable resources for extracting the correct pattern is always necessary. In Reza Ziaei Workshop, we have collected and evaluated many Golden age patterns due to the scientific and empirical potentials that are available, and extracted the optimal geometric design off each, due to the principles of physics and mathematics. Henceforth, an exact geometric output can be extracted using high-tech computer-aided design tools (CAD), which itself requires another field of technical ability. This special service is appropriate for professional violin makers and other makers who would like to apply their artistic skills on an exact and correct pattern.
But when it comes to applying the pattern on a new instrument, then the artist’s abilities to implement his/her idea becomes particularly important. For the maker who has chosen the correct pattern, the prior step must be taken by providing a mediate tool, called mould.
An ideal mould, particularly “Inner Mould”, makes it possible to attain the compliance of circumferential forms and proportion of different parts of the structure, based on the applied pattern, and also to assemble the various components of the ribs’ structure with high accuracy.
In the meantime, for making an inner mould based on a particular pattern, both empirical knowledge and proficient skill, and also well-understanding of the concept of mould is required to create a delicate and accurate piece. The mould actually defines the primary quiddity of the instrument and also, it is the substantial element on which the geometric qualities of the instrument depend directly. So, it must be done with a masterful precision, together with high technical level and great understanding of the process to attain a final product which can properly guide the further steps ahead. 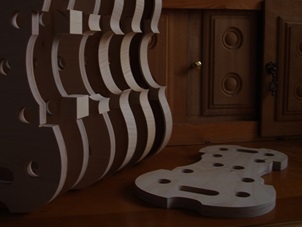 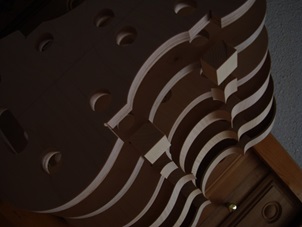 Main properties of an ideal mould are as follows:
1- Correct circumferential form, based on the geometric design, with a maximum acceptable error of 0.1(mm).
2- Symmetry in circumferential form of the mould, exclusively for moulds which are based on symmetric patterns.
3- Exact reliable symmetry line to refer in the steps ahead.
4- Accurate thickness of the mould to refer in the steps ahead, with a maximum acceptable error of 0.1(mm)
5- Correct right angles of the circumferential span for complete compliance with the ribs’ surface.
6- High quality of material, due to the aesthetic characteristics and also the least amount of deformation over time.
7- Exact devising of the various components, including the placement of blocks, etc.

The Role of Arts in Development of Societies

Mr. Mohsen Ghanebasiri, author and critic in the field of economy, culture and arts, as the next speaker, highlighted the role of arts, specially the music, in development of societies: “As far as the individual upbringing is concerned, a newborn baby is absolutely dependent. The relation between the baby and the parents is based on orders. There is lots of relativity in these orders; therefore, they are political orders. In the economy, however, the relations are mutual and based on common logic; hence, the formation of the concepts of democracy and individuality.