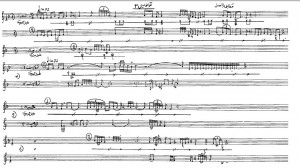 The Ta’zieh ceremony of Imam Hussein’s martyrdom ends with the performance of two trumpets accompanied by a small and a large drum (Transcription No.3). The coincidence of different voices, resulted from the change in the single melody with first and second trumpets, especially on lines 5 and 6 (Transcription 3) is clearly obvious. The second trumpet performs the melody performed by the first trumpet with a delay and slightly changes it. Consequently, various voices resulted from heterophonic variant coincide with each other (Transcription 3, d staff 5, a2 staff 6).

Polyphonic forms exist not only in the music of Ta’zieh ceremony but also in the music of Iran’s regions: In Baluchistan, one of the songs for wedding ceremonies is called “Laroo.” The song is usually sung after the bridegroom’s bath when he is going his seat.
Additionally, “Laroo” is also sung on the sixth evening after the child delivery; hence, it is also called “sextuple”. The reason for such a title “Laroo” for the song is the refrain consisting of meaningless syllables “laroo li laroo laroo.” 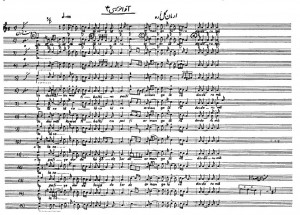 Arman Gol Are avaz is sung by both the soloist and the choir; that is to say that it is offered in responsorial form. In this case, two different voices coincide in the fifth and third intervals (Transcription 4, staves 2, 5, 7) because the soloist has not finished the paragraph when the choir begins singing the next paragraph. Each avaz paragraph consists of a period, which in turn, consists of four melodic figures (a+b+c+d, staff 2).
Out of these four figures, the first and the third figures are almost identical (a and c). This is while the second figure (b) seems contradictory to others. The last figure (d) only consists of the repetition of final note “la”.