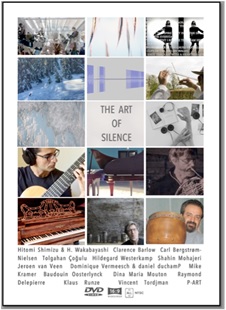 The Art of Silence is a 36-page booklet with personal comments by the contributing musicians. The booklet also includes a DVD which consists of original video and audio tracks.
On 11 June 2017, the Belgian microtonal artist Paul A.R. Timmermans who had also managed the non-profir “Micrtona” Project in 2015, once again selected and invited international musicians to make contributions to the non-profit Art of Silence project. In his correspondence with potential contributors, Timmermans stated that he will bring forward the significance of silence for music and society, different views on interaction between music and silence, and “silence vs. music as a hot item in the 21st century”.
The musicians are selected and contacted due to their “specific artistic approach, their merits as an innovator (acoustically/ digitally/ soft) and of course for their relationship with silence.”
Shaahin Mohajeri, the award-winning Iranian microtonal composer, is also listed as one of the contributors to the project presenting one pieces entitled “For Paul”.
The prominent Iranian microtonal composer describes silence as below:
“If we consider music as painting, silence is an important color like the other colors which a composer or player uses to paint music. Silence must not be considered as a part without any sound and only waiting period; it should be rather considered as a time of active listening. Silence can relieve the listener’s tension when he or she follows a phrase, but it also builds tension as the listener awaits for next parts, much like a good conversation. When too many people talk about an idea this can be very hard and disturbing for the listener. So, knowing when and how to use silence is one of the key skills of any musician.”
In his microtonal music “For Paul”, you can hear a conversation between instruments. Shahin Mohajeri has made an effort in this piece to depict silence as a color and as part of his musical conversation as it was also explained above.
Watching the DVD-trailer on Youtube, you can provide the audience who are interested in microtonal music an overview of the non-profit project “The Art of Silence”. The video may be found at: https://youtu.be/M9KMG7dshqQ
The following picture shows quarter-tone tuning of Shahin Mohajeri’s music:

Shaahin Mohajeri is a percussionist and microtonal theorist and composer. He has won two international microtonal awards. He was won AEH and Muto Ethno2 Microtonal Demos Competition in 2010. He was announced as the Finalist in UnTwelve 2nd Annual Microtonal Composition Competitions for the Battle of Ahuramazda and Ahriman in 2011.
Source:
– Paul A.R. Timmermans’ Correspondence with Shaahin Mohajeri
– The Art of Silence Booklet