With regard to the last two Avazes (Arman Gol Are and Veŝ Tavaré Na, transcription 4 and 5) it is worth reviewing two theories about the evolution of polyphonic forms.

The first theory belongs to Fritz Bose[i] who believed that polyphonic forms have developed through three old forms in the alternative change of avaz between soloist and choir. These three forms are introduced below:

The coincidence of different voices due to these three old ways in the alternative change of avaz has led to the development of polyphonic forms. And drone and even ostinato have developed out of these three forms[ii].

The second theory by Marius Schneider argues that the evolution of polyphonic music is a result of heterophonic changes through the performance of a melody by several singers[iii]. This theory is rejected today. With regard to the emergence of polyphonic music, other theories are offered as well[iv].

In regard to drone, the song of Bahraini divers– despite its relation to the music of Iranian southern coasts – is studied below.

Fishing time in Bahrain is limited to two periods of the bigger dive and the cold dive. The former spans over mid-June to mid-October; while, the latter spans before this period. Anglers include navigator, divers, assistants to divers and cormorant[v]. 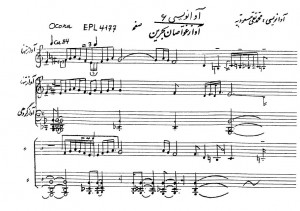 On occasion of the 8th anniversary of launching HarmonyTalk Online Journal on 6 April 2012, Reza Ziaei, master luthier and researcher on classical music instruments (violin family), announced that the first phase of the project to improve Qeychak has borne fruit. The new instrument would feature a bowl of ribs and the material used for the surface would be wooden. Carrying out the second phase of the project took more than 7 years engaging the new members of Reza Ziaei’s Workshop. In this phase, new researches were conducted from different aspects on the Qeychak and the modern versions of the instrument which were introduced previously by other instrument makers. The available versions of the instrument were studied in terms of their weak and strong technical features.