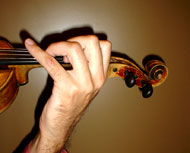 2.To remove a finger from the finger board do not hold the finger too much above it and do not take finger very far from it (also it is necessary that the distance of finger as it is about to be put on the finger board or when it is removed must be the same.)

4.every finger should achieve the ability to transfer force to finger board only through finger tips.

The best way of putting finger when changing string is the process that involves the most comfortable shape of hand and the least additional movement of the other parts of hand, however, it is often observed that some people make too many unnecessary movements with their “set of left hand” while practicing a musical note, that is more than the whole number of the notes of the phrase.

It should be mentioned that to learn better and have more effective control over the different states of playing on a string and between the neighboring strings and the non-neighboring strings considered in these collection of articles, one can exploit a mirror.

3/1/3/1: putting finger at positions one to four is performed considering paragraph 2/1/5 about the place of left elbow. Thus, shifting finger from E string to G string involves moving left elbow too much toward right.

3/1/3/2: at this state the player should avoid any twisting of wrist to either sides when putting finger on neighboring strings mentioned in paragraph 3/1/2. (Especially twisting to right during the process of shifting finger from G string to E string.)

Notification 16: direction of the line of wrist to elbow and the place of elbow change while putting finger in position five and those after it. This will be discussed in the section on practicing the positions of left hand.

3/1/3/3: to perform fifth intervals(Quinte), finger should not be shifted from a string to the neighboring string. Instead, the player considering this state from the very beginning, should keep finger on two neighboring strings at the same time so that when shifting string quickly no sound interruption appear due to shifting finger .

Notification 17: to learn about using free string while shifting to the neighboring string you can see the section on free string in edit articles in violin II and III.