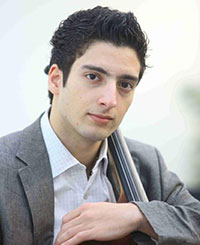 Watch Payam playing cello at the age of 18.

One focus of his musical activities is chamber music. In 2009 he founded, together with Romaine Bolinger and Alexander Boeschoten, the piano trio “Gagliano Trio”. The Trio gave it`s debut in 2009 at the Zurich University of Arts. During its studies the ensemble was decisively influenced by Stephan Goerner (Carmina Quartet), Benjamin Engeli (Tecchler Trio), Eckart Heiligers (Trio Jean Paul), Rafael Rosenfeld (Merel Quartet), Zakhar Bron, Thomas Grossenbacher und Prof. Homero Francesch. The Trio has already been a guest at international concert venues and festivals (e. g. Schubertiade Hohenems (Austria), Kammermusik Basel, Rüttihubeliade). Their repertoire draws a line from the works of the classical period, via the Romantic idea of „poetic music“ to the music of today. Several concerts were recorded by the Austrian Broadcasting Corporation (ORF). Recently the ensemble triumphed at the chamber music competition of the August Pickart foundation. By naming their ensemble Gagliano Trio, the three musicians refer to the neapolitan luthier family, who wrote music history by making stringed instruments in the 18th and 19th century. The violinst Romaine Bolinger plays on an instrument made by Ferdinando Gagliano and Payam Taghadossi plays a cello made by Lorenzo Ventapane, who was a pupil of Nicolo Gagliano.
Payam Taghadossi collected essential orchestral experience as an intern and later substitude at the Zurich Tonhalle Orchestra and as principal cellist with the Basel Sinfonietta, Bron Chamber Orchestra and the Symphony Orchestra of Liechtenstein before the Basel Symphony Orchestra hired him in 2014. He appeared as a soloist and in various chamber ensembles from North America, Europe and the Middle East, to South Korea and Japan. He currently plays a Lorenzo Ventapane cello from the year 1820.