The article “Illusion or Ingenuity?” has been welcomed by the website readers and now, one of them has pointed some notes and facts about it as below:

The criticisms and questions raised by the readers of the article were mainly focused on two subjects:
1- Uncertainty about the accuracy of the intelligence quotient (IQ) of Iranians (84) and the validity of the source used for the reported IQ.
2- The involvement of factors other than “not so high IQ” and “Illusion of intelligence” in the enumerated imperfections of the music of Iran.

It is hoped that the following hints, could resolve the uncertainties, answer the raised questions and lead to a fair judgment:
i. The source used in the Yaghoobian’s article for reporting the national IQ score is a website named photius (www.photius.com). The site itself got the information from a 2002 book “IQ and the wealth of the nations “by Richard Lynn, Professor of Psychology, and Tatu Vanhanen, Professor of Political Sciences. The book argues that international differences in current economic development are due in part to differences in average national intelligence as indicated by national IQ estimates. The IQ figures were based on actual tests for IQ in 81 nations including Iran. In 104 of the world’s nations there were no IQ studies at all and the IQ was estimated based on IQ in surrounding nations with similar ethnicities and cultures.
Many other studies have used the data reported in this book, while some criticisms has been raised including the questioning of the methodology and of the incompleteness of the data, as well as of the conclusions of it. In 2006, the authors published another book named “IQ and Global Inequality” presenting calculated IQs for 113 countries and estimated IQs for an additional 79 countries. They also responded to the first book critics.
In 2010, in an article entitled “National IQs updated for 41 Nations”, Lynn presented new national IQs for 25 countries and revised national IQs for 16 countries and there was no change in the IQ score reported for Iran (IQ score 84) (1).
In a 2012 article of Lynn and Vanhanen “National IQs: A review of their educational, cognitive, economic, political, demographic, sociological, epidemiological, geographic and climatic correlates” showed that there are significant and substantial correlations between national IQs and a wide range of phenomena including educational attainment (EA) (represented by scores obtained by school students in math and science), per capita income, economic growth, various other economic variables, crime, political institutions, health, demographic and sociological variables, and geographic and climatic variables. In this way they defended the validity of their reported national IQs and believe that these high correlations would not be present if their national IQs were meaningless (2).
ii. One of the most valid studies designed for large scale and international assessments of teaching and learning in mathematics and science used in the intelligence-focused articles is “TIMSS” (Trends in International Mathematics and Science Study). TIMSS is a project of the International Association for the Evaluation of Educational Achievement (IEA) (3).
First conducted in 1995, TIMSS reports every four years on the educational achievement of Year 4 and Year 8 students of many countries, compares them and provides an international perspective on teaching and learning in mathematics and science. TIMSS scores are scaled to have an international average value of 500 (TIMSS scale centerpoint) and a standard deviation of 100 points(3).
In the article “National IQs calculated and validated for 108 nations” Lynn et al demonstrated that national IQs presented by them have a high degree of validity by proving that there was a high correlation between the educational attainment (EA) scores (obtained by integrating scores from a number of studies i.e. TIMSS) and the national IQs. The correlation of EA with measured IQ (N = 86 countries) was 0.917, and with measured + estimated IQ (N = 108 countries) was o.907 (4).
Fortunately, Iran has participated in all five TIMSS studies in 1995, 1999, 2003, 2007 and 2011 and the average scores of Iranian students in the 2011 study were:
• Average mathematics scores of 4th-grade students: 431
• Average mathematics scores of 8th-grade students: 415
• Average science scores of 4th-grade students: 453
• Average science scores of 8th-grade students: 474

As it is seen, the average scores of Iranian students in both grades are lower than the TIMSS centerpoint (500) (5).

iii. Many scientific studies have proven that intelligence depends on the genetic makeup (Genes and their inheritance) of individual as well as environmental variables (e.g. prenatal and early nutrition, parenting style, home environment, education, experiences, physical activity …). Using the adjectives undeveloped, developing and developed for describing the status of economical growth of the countries, in part represents the quality of environmental factors involved in shaping the intelligence of a nation. Therefore it is not so unexpected that the IQ and EA scores are lower in less developed (undeveloped and developing) countries.
Lynn and Vanhanen who founded the theory: “international differences in current economic and social phenomena are due in part to differences in average national intelligence”, also envisioned that for many of these are positive feedback loops such that, for instance, national IQs are a determinant of per capita income, educational attainment, and health, and these exert a reciprocal causal effect on national IQs(2).
iv. In a 2009 article “Decomposing self-estimates of intelligence: structure and sex differences across 12 nations.” Furnham et al compared the self-estimates of intelligence (SEI) across 12 nations (Australia, Austria, Brazil, France, Iran, Israel, Malaysia, South Africa, Spain, Turkey, UK and US) with the national IQs presented by Lynn and Vanhanen. All 12 nations estimated their IQ higher than that calculated IQs. The highest difference (34 points) only after South Africa belongs to Iranians (Figure 1) (6). 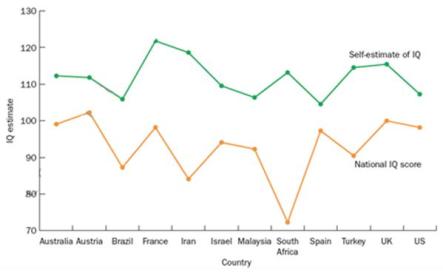 Figure 1: self-estimates of intelligence and national IQ Scores across nations (6).

This entry was written by HarmonyTalk
Tagged: Illusion, iq.