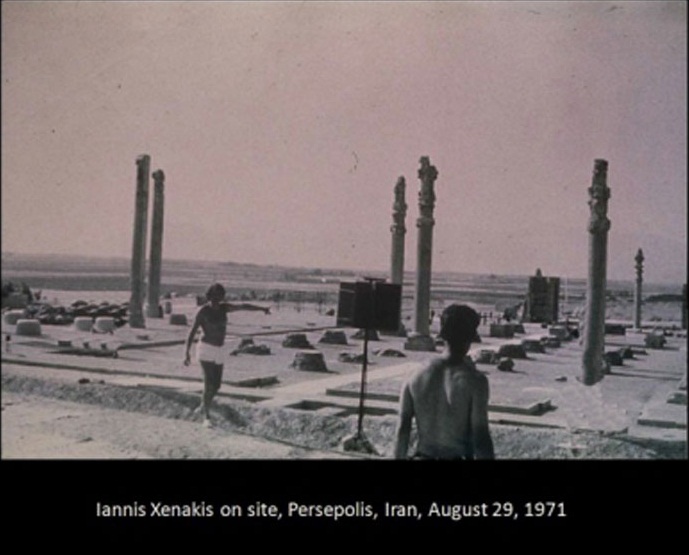 Shiraz Arts Festival which was held in Shiraz from 1967 to 1977 featured many contemporary renowned artists who were commissioned by the Iranian royalty to compose or create works of art for performance in the arts festival. Iannis Xenakis (1922-2001) participated in Shiraz Arts Festival three times in 1968, 1969 and 1971. The Greek-French composer, architect and music theorist, composed Persepolis a polytope to the historic site and named after the ancient capital of the Persian Empire.  Persephassa (Persepolis) which consists of “similarly epic proportions” is believed to be similar to La Légende D’Eer in sound and to Bohor in force. The music was “designed to play during a light show using multiple lasers and mirrors.”

We have borrowed the following review of the piece from www.nightoftheworld.com:

“Persepolis squeals into life amid a multitude of curious mechanical moans and groans that sound as if a scrap yard is slowly awakening out of hibernation. There is no information as to the methods which were used to produce the sounds but I feel this only adds to the mystery. Tinkling glissandi slide behind the omnipresent grind and drones of the concrete sounds, as layer upon layer of sound flow across the senses. Any preconception of concrete music or contemporary electronics are thrown out the window as structures collapse around your ears.

“Most people would just call it noise, and without knowing anything about the dense complex mathematical planning that went into this you might be right in thinking like that too. Persepolis sways and dips under its mammoth weight during the course of its journey, at times deafening with unrelenting bass and metallic drones, and at other times smoother allowing the pitched electronics to seep through the mass and delight the senses. It is very difficult to describe the exact sound of Persepolis it’s composition is so radical and it’s range of timbres and textures so rich that I am left to clutch at metaphor’s. This music really does take no prisoners.”

Iannis Xenakis (29 May 1922 – 4 February 2001) was a Greek-French composer, music theorist, architect, and engineer. After 1947, he fled Greece, becoming a naturalized citizen of France. He is considered an important post-World War II composer whose works helped revolutionize 20th century classical music.

Xenakis pioneered the use of mathematical models in music such as applications of set theory, stochastic processes and game theory and was also an important influence on the development of electronic and computer music. He integrated music with architecture, designing music for pre-existing spaces, and designing spaces to be integrated with specific music compositions and performances.