4/1/2 Left Thumb:
Violin players should always pay attention to the proper position of the left thumb and other points related to it and to its joining point to the palm.

Normally, the left thumb is stretched and is not bended in first and last knuckles (last knuckle is the one which joins the thumb to the hand), there is no need to bend the left thumb while holding the instrument or playing it.

NB 7: Knuckles are rows of connecting joints where the last phalange joins the palm. The order of counting finger joints in these series of articles has been selected from finger tip toward knuckles arbitrarily.

As the thumb is not used in general state of playing violin, it should be noticed that in the first manner of bending, digression of the tip of thumb toward fingerboard makes the thumb disturb other fingers through finger placement. This disturbance increases to the most when the player places his finger on G string.

On the other hand, bending thumb inward causes a kind of pluck in thumb and also in part of left palm which is near the thumb. Not only this may cause early tiredness during exercise, it decreases the speed of playing.

NB 9: Usually, only inward bending occurs in the last phalange of the thumb. This kind of false bending, which causes a sort of outgrowth in internal part of palm which is joined to thumb, decreases the movement of other left hand fingers.

NB 10: After this introduction we will attend to the most common mistake of players related to bending the left thumb, i.e. a state that occurs due to the mixture of the above-mentioned mistakes. In this position the thumb is bent inward simultaneously at first and last phalanges. Occurrence of this position causes the player to suffer from all of the above-mentioned errors resulting from false bending which leads to deficiencies in playing.

NB 11: In general, it is better to raise the left thumb, form the fingerboard, about the distance between the finger tip and the first phalange (or central point of the first phalange). Doing this makes the necessary “central gap” between player’s left hand and the back of violin neck balanced (it is worth mentioning that the amount of the gap varies according to the form and size of players’ hand.)*

NB 12: If the elbow inclines excessively toward left, player will encounter problems in landing his finger on G string. Moreover, he will face difficulties reaching the last string of the violin.

This critical state in the fourth finger of the left hand is problematic even for players who have long and slim fingers.

NB 13: If elbow inclines more toward right, the player will encounter problems in correctly landing his finger on E string.**

*If the left hand is raised excessively upper or lower than the neck, in both above mentioned states, central distance (gap) is lost and causes some problems in manner and form of finger placement on the fingerboard which will be discussed in finger placement section.

** It will be discussed in finger placement section. 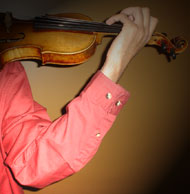 Bending of Thumb Toward the Fingerboard by Mistake

False Method in inclining Elbow to the Left

This entry was written by Ali Nourbakhsh
Tagged: violin.