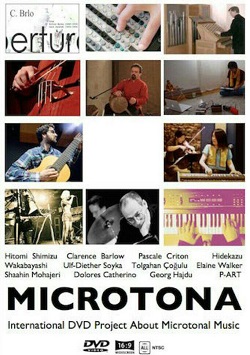 Microtona is a sixty-eight-page booklet with personal comments by the contributing microtonal artists. The booklet also includes a DVD which consists of 8 original video tracks and 9 original audio tracks. The project is an international one featuring unpublished pieces by composers from Iran, Japan, U.S., France, Austria, Germany and Belgium.

In May 2015, Paul A.R. Timmermans selected and invited microtonal musicians from all over the world to contribute to this non-profit project. In his correspondence with potential contributors, Timmermans stated that they are contacted due to their “specific artistic approach… microtonal merits as an innovator (acoustically, digitally, soft), as a composer and/ or as a performer.”
Shaahin Mohajeri, the award-winning Iranian microtonal composer, is also listed as one of the contributors to the project presenting two pieces entitled “Cyrus the Great entered the city of Babylon” and “Tragic parting of the Souls.”

The prominent Iranian microtonal composer describes microtonal music as “A strange and wonderful world of new intervals and musics” which has motivated him to think “microtonally”. He further explains that “These new melodies, harmonies and new musical language are a gift from God to me. I try to test different intervallic models in 96-EDO (equal division of octave) to find their musical characters.”

Mohajeri’s ambition is composing microtonal music for symphony orchestra. Moreover, he is currently working on his “model of time intervals based on the theory of tuning systems” which he calls “Microrythm.”